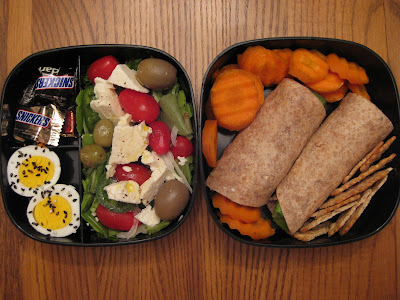 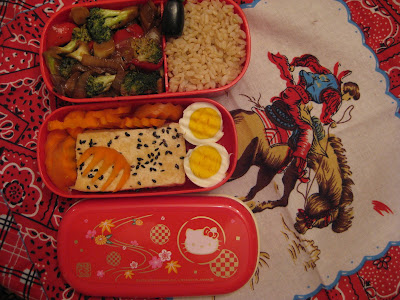 Since last spring I have been working out at the gym religiously (with one interruption for a hurt knee that came from stupidly jumping down from a pickup truck bed in a hurry).

My workout has come to be enjoyable!! I spend one hour on the elliptical machine, marching through space while unbelievable junk TV (like "Dance Your Ass Off")plays itself out before my eyes and commercials try to sell me sleep, and acne-free skin, and innovative forms of birth control.

Then I go to the weight room and mystify myself with settings and numbers and postures oh my, for 1/2 hour. Then I stretch in the designated stretching room, where I am in grave danger of falling asleep on the floor.

But all this means I must have some significant protein within a half hour or...who knows what might happen. Nothing, is my guess. But whatever helps me take the whole workout thing seriously is good. So today's bentos take account of that, along with the fact that Jan is recovering from a cold and feels poorly so gets a bigger bento than usual.

Bentos Every Day, and Hard-Partying Barbie 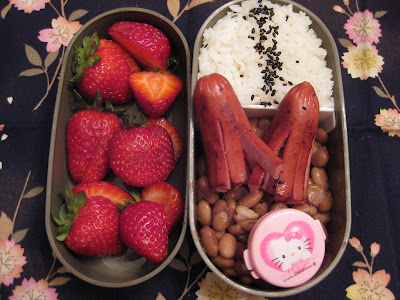 That is my goal and so far I am doing pretty darn well making bento lunches every day of the new semester.

Above we have the re-invasion of the octo-dogs; I tried to get them to hold hands but octo-dogs are more into fighting than making nice. They are resting on a bed of pinto beans, and there's a container of mixed Sriracha sauce and hoisin, which was the best octo-dog dipping sauce we have tried. 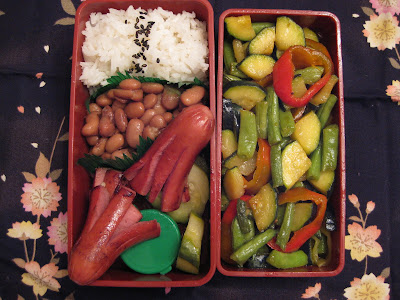 Jan's lunch on the same day continued the theme, but instead of strawberries he got a tier of mixed stir-fried veggies into which I added some rice vinegar and mirin for the last few minutes at a slightly lower temperature. They picked up a nice flavor! Jan has to watch the carbs so the vegetables are the better choice for him.

And this last bento had pasta with pesto sauce and fresh sweet pepper rings on top, a container of Parmesan, and a salad; Hello Kitty sidecar of Ak-Mak whole wheat crackers. Jan loved this one! 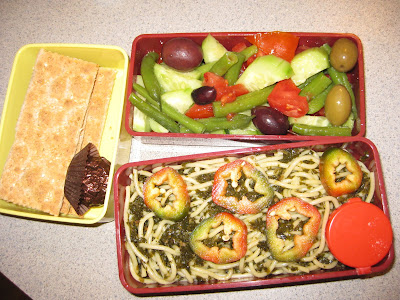 And for the pathos of it, I include here a photo I took at a birthday party today, after what was called "Barbie Wars" had been played by all the 467 kids present: 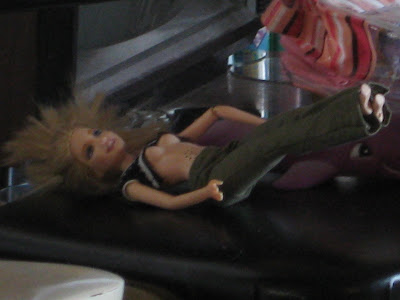 What is it that happens to poor Barbie's hair after the passage of indefinite time and hard use? I say nothing of her trampish belly tattoo. 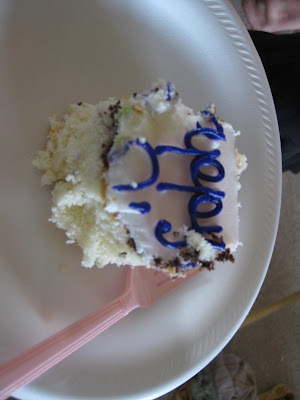 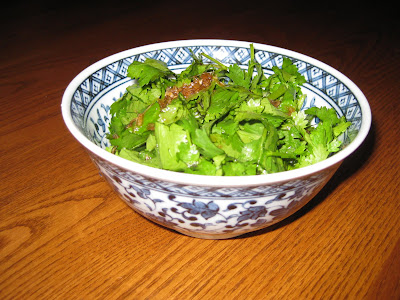 If you love cilantro, or often get a big beautiful bunch of it in your farm share like I do, you may sometimes come up against the old "How to use this up?" question. You can only eat so much salsa, only eat Thai noodles and spring rolls so often (well, pretty often!!).

DONBURI MANIA is what the title suggests, but also more, since Kobayashi also includes some donburi sides like soups and salads.

Cilantro coarsely chopped, fresh ginger and garlic, sesame oil, soy sauce, lemon or lime juice (I used lime and loved it), and a tad of sugar. Mix it up and let it sit for awhile, then stuff it into your bento next to some beautiful rice and voila.

Speaking of rice: Kobayashi loves him some rice. Listen to this verdict on what's really important in a good donburi:

"Can't get enough rice? That's the sign of a properly prepared donburi. Sure, the stuff on top takes a lot more time and preparation, but all of that, really, is meant to enhance the rice.It just serves to make the rice more delectable."

How do you like that little paradigm shift? I love this guy.

Here's Jan's bento from yesterday, which has only one slightly unusual thing and it isn't the panda lid: 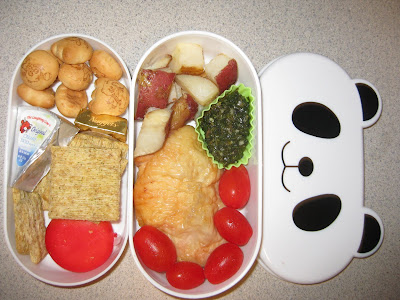 On the left: cheeses, Triscuits, Hello Kitty strawberry filled cookies, and a chocolate (Hello junk food; I was in a hurry); on the right, roast potatoes, cherry tomatoes, chicken, and -- the unusual thing -- Thai basil pesto. This recipe calls for fish sauce, rice vinegar, and few other non-traditional pesto ingredients and it is awesome!! I had scored a huge bunch of Thai basil at the Harvest Festival Saturday and this pesto kind of called my name as a noodle adornment.

Here's the cover of Kobayashi's book: You have to love a cookbook named after mental dysfunction. 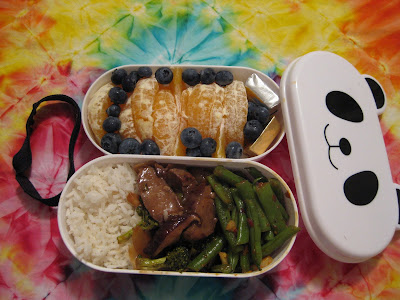 The fragrance of them in your kitchen is so delightful! So why not cook them at 5 a.m.?

Getting up very early this term and so far it is working out well. The gym is not at all crowded, and the sun comes up over the lake out the big plate glass windows while I am marching in the air on the elliptical and watching "Tool Academy"* or some such cultural enrichment program.

In this bento I had leftover shiitake mushroom and steak stir fry, white rice, and the fresh Szechuan green beans, along with a mandarin and some blueberries & two chocolates.

In this second bento I had a salad but I have to report bad behavior on the part of Hello Kitty: 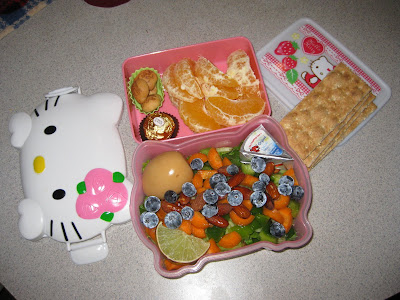 Kitty has little snap closers on each side, and something in my bag flipped one of the closers in transit so Kitty spilled her guts all inside my bag. This is not a great design! It adversely affected my mood to find olive oil and green pepper chunks all over the Iliad. But I got most of it back into Kitty and the lunch was good. Lesson learned.

*"Tool Academy" is a reality TV show in which bad boyfriends (the Tools) are sent to boot camp style training to become better. I've only seen it once, on the elliptical, but I stayed longer to see how several of these relationships would turn out. Almost all of the guys seem like contenders for Penitentiary PrimeTime, and their girlfriends have a hard and desperate edge. There's a lot of crying - just like life! - and every guy who succumbs to the exotic dancers, while hidden cameras capture his every lapse, has a million excuses: "They were always making fun of me in school!". Which would of course explain why you must now lick vodka out of a hot girl's navel as your ladyfriend watches in despair.
Posted by Flying Lily at 3:09 AM 4 comments: 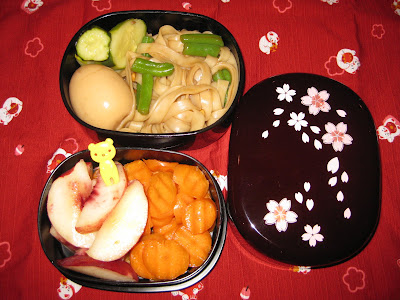 Honest to Parker this was one of the best bentos I've ever eaten. I am trying to figure out why. Possible explanations:

1. The soba noodles were unusually good. I don't use a recipe any more for the sauce and sometimes it's a little myeh, but this time it was terrific.

2. The pickles were spicy and cold.

3. The carrots got just the right amount ume'd by lunch time.

4. The nectarine was sweet and had that honey fragrance white ones sometimes have.

But most of all: I was starving, because this is day 1 of my new regime: Get up at 4, get to work by 6, hit the gym there at 6:30 when it opens, jump on my favorite elliptical, realize that I have forgotten my earphones so I have to lip-read junky TV for 60 minutes, then go to the weight room and pretend I know what I'm doing with all those machines for 20 minutes, then go to the showers and try to hide my body from the 19 year olds so they don't contract a crippling fear of later life, then be at my desk by 8:15 and start thinking about my bento lunch.

"Hunger is the best sauce"; my mother's saying collection, saying #284.

This shall be my process for T-TH-SAT all this semester, except for Sat when I will come home and take a nap instead of going to work. That's my plan anyway.
Posted by Flying Lily at 1:31 PM 2 comments:

Nothing very special in my bentos lately, but tasty lunches nevertheless!! 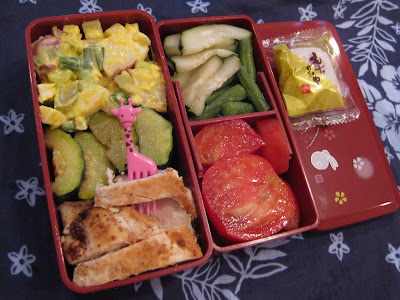 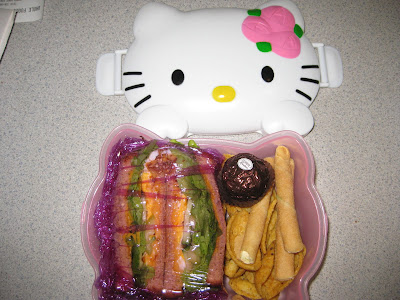 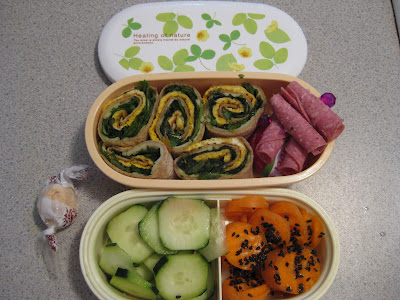 Whole wheat tortilla rollups with scrambled egg and cilantro; hard salami rolls over a Babybel cheese; fresh cucumber and carrot slices; who knew that black sesame seeds on the carrots would look so very much like BUGS?! 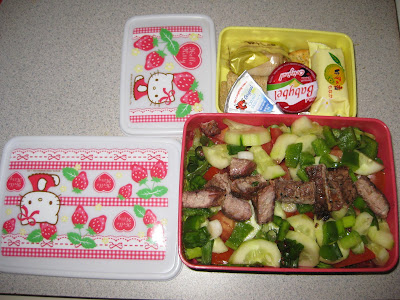 Big Kitty has a leftover barbecue steak salad; Little Kitty has an assortment of crackers, cheese, and Asian cookies.

Fun fun fun!! I can hardly remember when lunch was a carton of yogurt and a peanut butter sandwich, day after day...

And just to be crazy, here's a picture of me on my horse John at yesterday's competitive trail event; we had to walk in this river for quite a way, and John was so happy to get his tootsies wet & get a big drink. A nice young woman was taking pictures of all competitors and posted them on Facebook later. 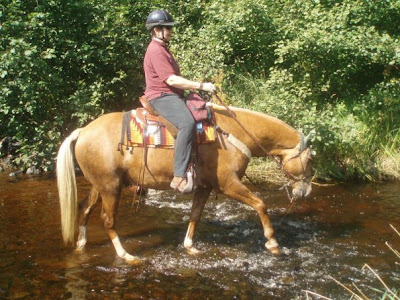 Neat Japanese song originally by the group Happy End, nicely covered and you can see how this studio artist sets up his looping background:

It seems like a song about the changes in Japanese cities, and how a quieter way of life is still detectable under the urban crowding and modernization. But I'm not sure of the meaning; I just love the soft melody.
Posted by Flying Lily at 8:09 AM 1 comment: 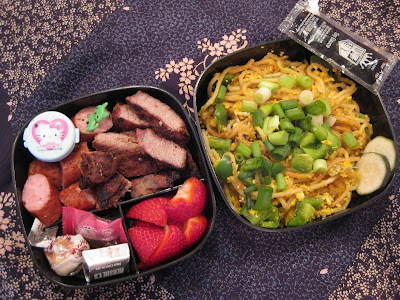 Is there anything better in a bento than leftover barbecued meat??! Well probably there is. But.

Jan's bento is big today because these days just before classes start are some of his busiest. I thought he might enjoy a feast including leftover bratwurst and steak, stir-fried sesame noodles, fresh strawberries and some Asian sweets of indeterminate nature.

Sriracha in the HK container! I love this stuff. My older son eats steamed jasmine rice with sriracha on it every night for dinner in his little messy dorm room. While this sounds a little heart-breaking, he says it is perfect. He has always been one to glom onto something he likes and stick with it through thick and thin. "The bullheaded one."
Posted by Flying Lily at 5:31 AM 2 comments: