Other cultures always look a bit strange from the outside. How do Americans look to Japanese people? Well, here's one answer: unbelievably wack and bizarre, prone to weird fits of raucous laughter, and clueless about the most important things in life (like: how to enjoy a picnic).

A Japanese late-night TV show spawned a series of skits called "OH! Mikey!", involving mannequin 'actors' who represent an American family living in Japan. The central character is a boy named Mikey; his mother and dad always smile huge American smiles even when they are fussing at Mikey or quarreling with each other - because Americans smile too much. Or because mannequins can't change their expressions. Or perhaps both.

Here's a sample; in the first episode, you will see the Fuccon family (yes, that is their name) at their picnic. They eat leek sandwiches and leek-stuffed musubi, which is the mother's idea of a proper 'bento' and which causes the dad and Mikey to complain. In the end they will decide that picnics are stupid and they can eat lunch and quarrel at home.

Pretty strange stuff, but after all....AHAHAHAHAHAHAHA!!!!!
Posted by Flying Lily at 6:58 PM 3 comments: 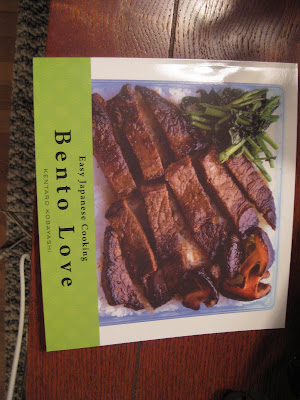 Bento Love: Easy Japanese Cooking, by Kentaro Kobayashi, just came out and I had pre-ordered a copy from Amazon for $17.50. It looks like it will really help me move up to the next level in my Japanese cooking, because it is really a "how-to" cookbook rather than just a list of recipes and ingredients.

For example, take this paragraph on how to prepare a chicken thigh for cooking:

"Keep in mind: chicken cooks slowly. So don't forget to cover it and let it cook through. Enjoy the flavor of yakitori-style chicken for lunch!...

Take a single chicken thigh and poke about a dozen holes through the skin with a knife for even cooking and to prevent skin from shriveling up. Remove fat with cooking scissors and slice the surface of the meat repeatedly to break up tendons. Rub a very generous amount of salt (about 1 Tbsp) into both sides and sprinkle with pepper. Now you're ready to cook..."

Did you know all these tricks? The book is full of them. The author loves meat so the bento suggestions are often meat plus rice plus a small amount of veg. 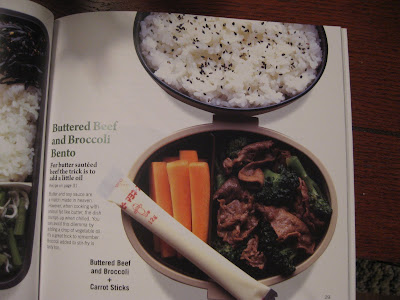 Here's a look at the table of contents so you can see if you're interested: 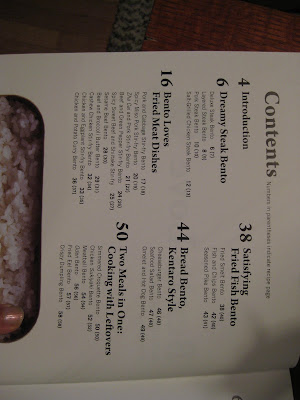 I'm sorry that blogger's photo uploader is deciding these pics must be sideways; I can't figure out how to short-circuit that. 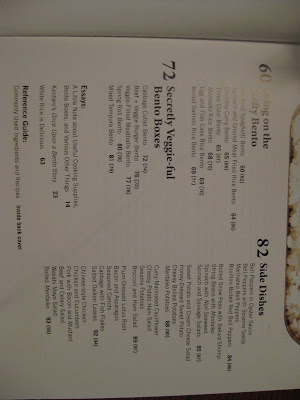 Here's one bento I plan to try to replicate very soon; the idea of yummy salted turnip greens over rice is just calling my name: 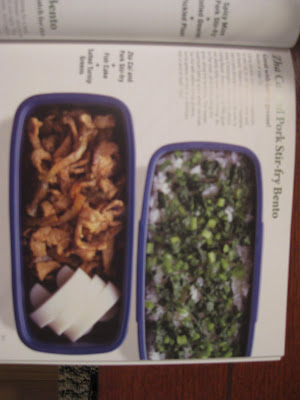 But almost every bento looks so good I think I'll have some terrific ideas and know-how to make the coming academic year really SUPERBENTO!!

The book is not purely Japanese food either, though its American and European influenced bento menus have the neat touch of strangeness that characterizes Planet Bento in my mind. So we get one lunch that consists of two small sub sandwiches: one with an avocado omelet in it, the other with a sausage. You see what I mean.

The only disappointment I had with the book was this: Mr. Kobayashi appears to be unaware of the essential food group known as dessert. If we want sweets in our bento or on the side, we are on our own. I went confidently to the back of the book, that ghetto where desserts usually reside in our cookbooks, and lo there was nothing but an explanation of common ingredients. No cute rice puddings, no home-made Pocky, no cute moshi. it's as if dessert did not even exist.

Well Mr. Kobayashi, man does not live by meat and rice alone.

However this is a small thing and a true sweets-hound like myself does not really need much help to figure out ways to stuff those crucial calories into a corner of a bento box.

I think you'll like this book if you are not an expert cook of Japanese food already, and if you want some ideas to refine your preparation process. If you have sometimes had the thought, "This just ought to taste better!" about some of your Japanese cooking, as I have, this book will definitely bridge the gap in many areas.
Posted by Flying Lily at 4:40 AM 6 comments:

Berry Bento for a Monday 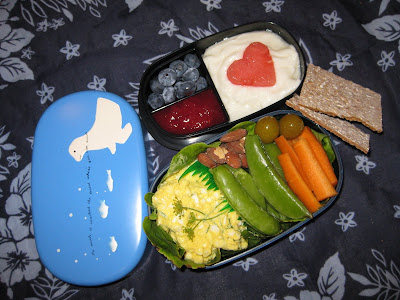 Getting back into bento-packin, since fall semester is almost here.

Today we have egg salad with fresh dill, sugar snap peas from my farmshare box, carrots and romaine from same; then blueberries, strawberry-jam-fail-sauce, plain yogurt with a watermelon heart, and some wheat crackers.

In addition to buying a farmshare of veggies every summer, I also buy a flower share from a different farmer. She delivers a bunch of flowers to your back door every week for 8 or 10 weeks depending, along with an essay about the names and attributes of all the flowers.

1. The blue and white flowers I put in the window. 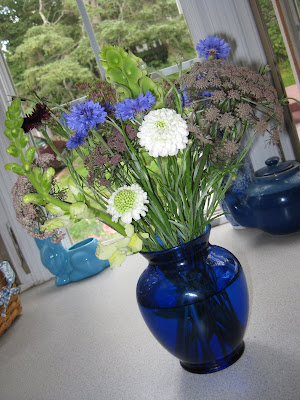 2. The orange and yellow flowers I put inside where I like their colors against wood: 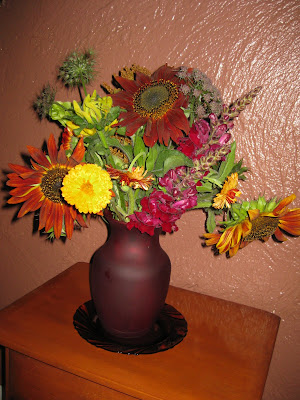 I am a firm believer in buying flowers for yourself!! Yes, it's nicer when some handsome swain buys them, but the swains are a little sparse on the ground these days so I go to plan B and they are still just as beautiful. 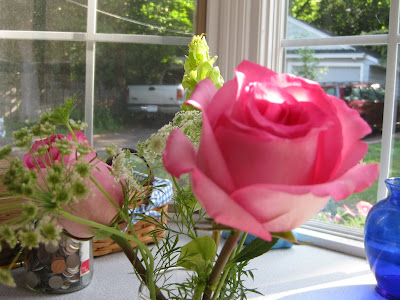 Labels: flowers for my lady 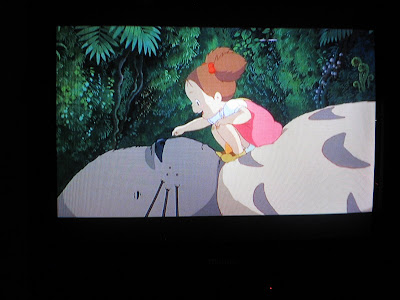 I know most everyone has already seen this 1988 film, but I just watched it for the first time and loved it!

I could not stand the dubbed over version I started out with - a very young Dakota Fanning and her sister (younger still?) with a sharp toned flat California way of saying "TOAD-aro"....switched to Japanese with subtitles: much better.

The story has a poignant realism rare for Disney subsidized projects (Disney bought the rights for American distribution and made the changes). A family in which the mother is seriously ill and in a convalescent home, the father is an absent-minded professor and kind but a bit distant, and the two girls are feeling the effects of a sudden move to the countryside & life without mom.

The house they are renting is dilapidated and full of 'soot sprites', odd little black asterisk looking supernatural beings who leave at once as soon as the family gives signs of happiness - laughing together.

Enter Totoro, whose name is the mispronounced Japanese word for 'troll', since the littlest daughter can barely talk yet - even though dad lets her wander around unsupervised all day and she gets badly lost twice during the film. She wanders off and meets Totoro asleep under a gigantic camphor tree. 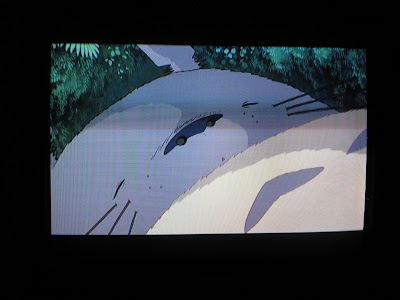 She falls asleep on his big soft belly, and is not missed until her sister comes home from school and goes looking for her. Sis had made them all bento lunches that morning! 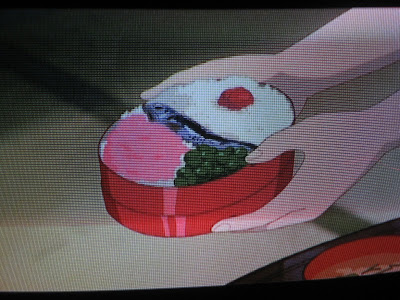 Totoro gradually becomes a friend to the family, at least to the two girls. In gratitude for the gift of an umbrella, 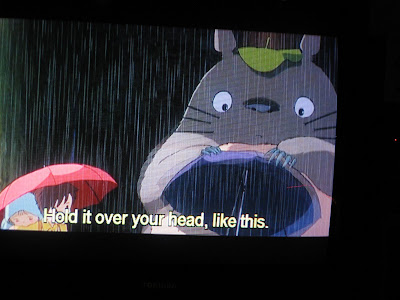 ...Totoro gives the girls a small bag of seeds. There's a wonderful magic dream sequence in which Totoro dances and along with the girls, causes the seeds to grow into a giant oak tree overnight. When the dreaming daughter awakens, the seeds have indeed sprouted.

The countryside is beautiful in a truly dreamlike way. One night scene finds Totoro atop his camphor tree playing a strange round flute in the moonlight. Eerie and magical.

The younger daughter decides to walk to the hospital to visit mom, and becomes completely lost. Totoro to the rescue, and with the help of a strangely psychedelic giant cat bus, the girls are able to visit mother in the hospital and hope for the future is established.

The seriousness of the mother's illness is never questioned, and given the 1950's time setting I had to wonder if it was war-related. My husband was shocked beyond belief at one scene where dad and both daughters are in a soaking tub naked together. The dad is very sweet but he is really letting the girls take care of themselves; hard to say whether this is a cultural difference of the time or a peculiar fact about their individual family.

The movie has a lovely air about it, a soft touch of magic and sorrow and hope that I really liked. It is left open whether Totoro might just be a comforting fantasy; but his kindness is real enough and makes you know these two little girls are going to be all right no matter what.

It left me with a strong desire to learn some conversational Japanese; what a beautiful language it is. 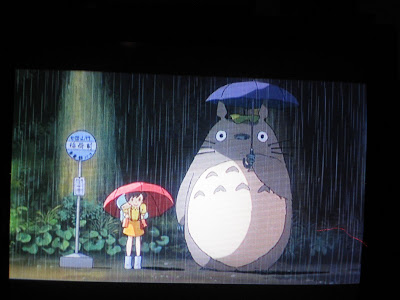 ADDED NOTE: Since this movie is old and was popular you can watch it online at numerous sites. Here's one nice quality version with good sound, Japanese dialogue with English subtitles; enjoy!!!: