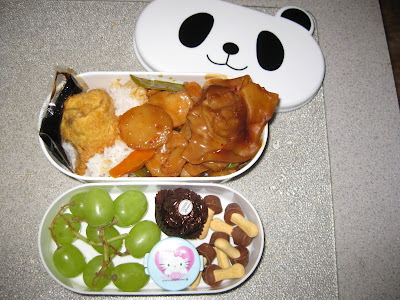 You know it will please,
like a fresh summer breeze;
it's a bento of smiling
Leftover Chinese.

Chinese takeout is the gift that almost always gives at least two meals if not three. I almost always order egg foo yung and this goes me for 3 meals, each one better than the previous. How great is that??!

I only wish the rice was a little less sad...but that is a minor quibble. Long live Chinese takeout!!
Posted by Flying Lily at 4:07 PM No comments: 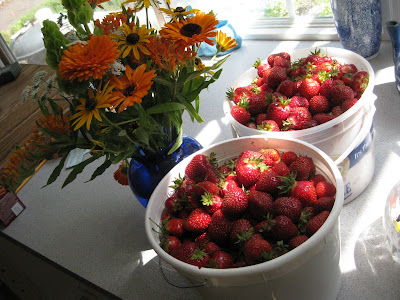 NQBR (Not Quite Bento Related):

I picked strawberries this past Thursday at a nearby "U-Pick" farm - they were all really ripe so I had to make jam and such as soon as I could. My jam turned out about as well as my octo-dogs usually do, so I have a lot of strawberry sauce - about enough to drown a Queen Mary sized bowl of ice cream.

I noticed there were several philosophies of picking posture: the kneelers, the backbenders, the sitters, and the changers. I was a changer. As various body parts went to sleep or started to ache, I would move.

It made me think about being a migrant worker who does this all day every day for a meager living. And this gave me a real gestalt shift when walking down the produce aisle in the supermarket -- all the human work hours that lie behind those piles of berries, cherries, tomatoes, heads of lettuce... It's a little scary to contemplate. From one perspective, our food is expensive (prices have gone up). From another angle though, it is far too cheap.
Posted by Flying Lily at 4:32 PM 2 comments: 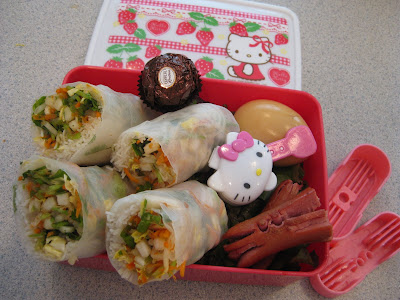 I just love a cold lunch of Thai salad rolls and spicy peanut sauce, on a hot summer afternoon. I'm slowly getting better at rolling them. My first efforts a few months back tended to be very loose and they would flatten rather than being round cylinders.

In this bento you also see the crab sausage I made in Avie's crab sausage maker!! I used hot dogs and they are tougher than vienna sausages so I got some crab leg breakage. My mom hated vienna sausages so much that she made my dad go sit in the backyard to eat them. I can picture him still, sitting in a lawn chair with a can of Budweiser in the grass, extracting vienna sausages from the can with a fork. But since Avie's crab thingy is going to work better with them, I will buy some viennas soon - sorry mom.

I learned a useful trick from a waiter in a local Thai restaurant: Take a dry wrap from the package and cut it in half, then use this half inside a whole wrap, right in the middle where the main ingredient weight is going to be.

This helps prevent the wraps, which are very fragile, from bursting and enables you to roll tighter.

And here's my last bento using the NeonVegas umeboshi onigiri I made: it also has pork gyoza, a shoyu tamago with mixed red pepper, sugar snap peas stuffed in around the onigiri, cherry tomatoes, and a Ferrero Rocher chocolate hazelnut delight. 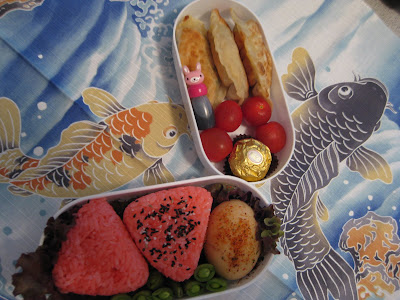 Nummy times!! We are going to go out and pick strawberries tomorrow at a local farm, weather and berries permitting. Strawberry pie!!
Posted by Flying Lily at 4:35 AM 4 comments: 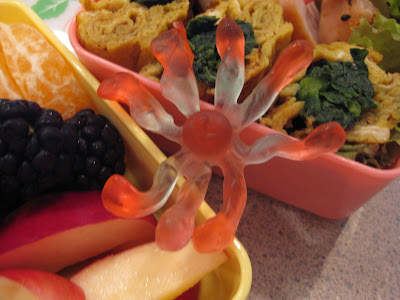 Look what I found in the bulk candy bins at Cub Foods!!

They come in several pretty alarming colors, and they taste...sort of permanent, if you know what I mean. I was still tasting today's Gummi Octopus hours later. But how cute is it??! Can you imagine a bento presenting a battle between Octodogs and OctoGummis? The Octodogs would have a size advantage, but the Gummis would be so creepy and techy that they might just win. I will work on this awesome concept. 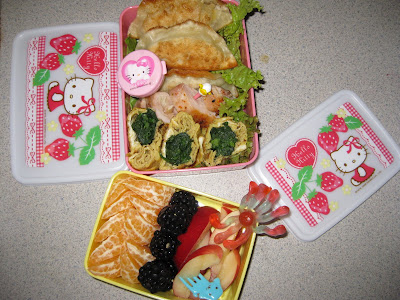 Pork gyoza, roast chicken with nanami togarashi sprinkled over it (this was yum), and a spinach tamagoyaki which I learned about on Cooking with Dog. Fruits in the extra dish.

I love these Cooking With Dog videos for many reasons:

1. You get great cooking tips: like with the spinach tamagoyaki, the cook boils the spinach just for awhile, lets it cool, and then wrings it out like a wet sock. Thus bypassing the problem of soggy spinach leaking through your dish.

2. The narrator: he is so charming! He's a little bit of a worrywort, and will give lots of cautions "Careful not to cut yourself! Uncooked gyoza filling will quickly go bad!" etc. He's also mysterious; the gimmick is that it's like the dog is talking, but who is the guy really? The cook's son? The cook's alter-ego?

3. The dog! He's so well-behaved. He just sits there on the stool while foods pass by his nose, cooking smells waft up, he never lunges for the bowl. In a few videos, he will discreetly drool a little, or whine when the cook chows down on the finished dish.

Here's the episode about making Taiyaki, and it has some terrific tips about cooking dry beans, even if one is not seriously considering the heartbreak of attempting to make a fish shaped bean filled cake inside a teensy little fishy waffle iron ("What Could Go Wrong?" hollow laugh): 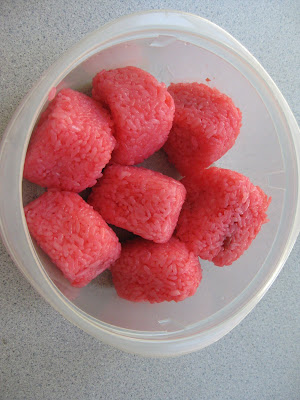 (Props to Avie for naming the bento below!!)

Yesterday I wanted to make pink onigiri so I did my research on the internet. Found JustBento's description of how to color rice naturally and saw that it was good.

However I didn't think I could get the red cabbage grated fine enough to 'disappear' in the rice, and JustBento uses an implement I don't own - a kind of grating stick that really pulverizes the thing being grated. Looks like a great kitchen tool.

BUT: I went prospecting in the cupboard and found some 1000-year old red food coloring that must hark back to some elementary school project my boys did...I don't have the slightest recollection of buying it.

The result, from using too much of this probably radioactive chemical, is these hot-pink onigiri that remind me of Vegas showgirl costumes. Each of these excessively fat onigiri (I keep overstuffing the molds) has a lovely salty red umeboshi in its middle.

Here's the little Kitty Bento I made this morning: 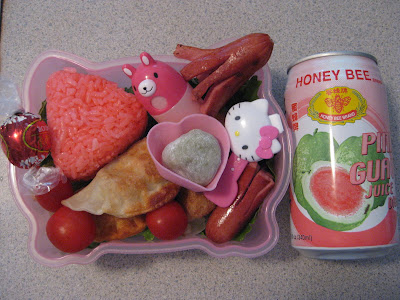 Vegas onigiri, pork gyoza (also made yesterday), two little octodogs in space wondering how they ended up in Vegas hungover, cherry tomatoes, furikake for Vegas in the little pink bear? container, dipping sauce for the gyoza in Little Kitty, a green-tea mochi in the heart, a Lindor chocolate truffle, and a can of pink guava juice.

This particular brand of guava juice, or this lot perhaps, tastes a little like a high school locker room smells, much as I try to pretend otherwise because the can is so cute. It's an effort to drink it, but I manage because I am a mindslave to cuteness.
Posted by Flying Lily at 5:15 AM 6 comments: 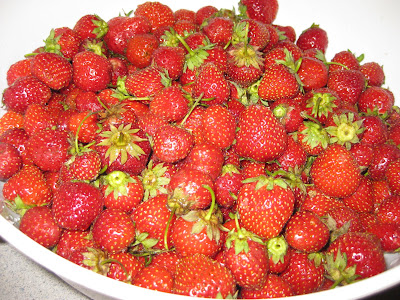 Is there anything better? Good for you, no calories or fat, taste like heaven. I got these at a roadside stand yesterday and they had such a fragrance. The guy selling them seemed depressed; I guess they were so ripe they could hardly last out the day, and it must be sad to stand there and watch your strawberries go over to the dark side, while people drive by talking on their cell phones and eating fast food out of styrofoam cartons...

Anyway I froze a bunch of these, gave some to my neighbor, and had a little strawberry festival all to myself. 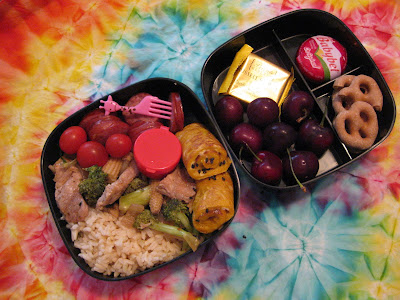 Kind of too much protein, but for Jan's diabetes the rice has to be kept to a minimum - rice really makes his blood sugar go sky high. It's too bad because so much good & cute bento stuff is rice based. Kind of too much sweets too! This wasn't a very well planned lunch. Optimal for him is protein and vegetables, a small bit of carbs, that kind of thing.
Posted by Flying Lily at 4:48 AM 3 comments: 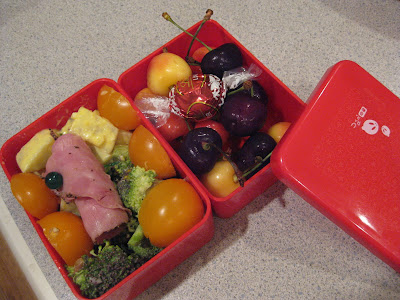 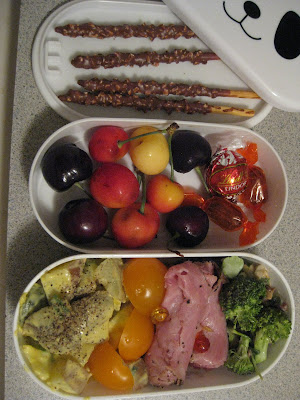 This was Jan's bento on the same day; different only on having Pocky in the lid, and more meat. 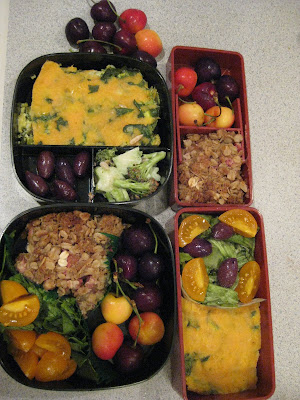 And finally here is the little deer who stared into my eyes for the longest time yesterday; we met on the dog walk, as she was about to make a suicide run across a busy street. 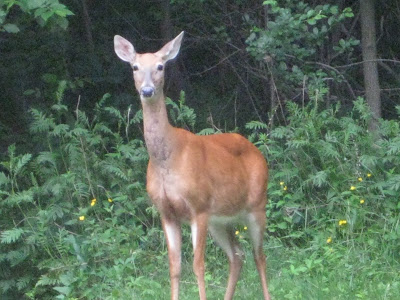 Deer are so weird. I don't much care for them because they eat everyone's plants and flowers, but they have a certain mysterious quality: that animal mystery.
Posted by Flying Lily at 9:09 AM 1 comment: